1862 - The first school in the settlement, a log building, was built.

1870 - Weldon Wiles Bobo migrates from Bedford County, Tennessee in 1870, and establishes a store.

1877 - A post office is opened in W. W. Bobo's home, by which time the community has acquired the name of Bedford.

1882 - Population passes 1,000. This surpasses in population all other communities in Tarrant County except Fort Worth.

1905 - A new highway (I-30) was built between Fort Worth and Dallas through Arlington and Grand Prairie. Population in Bedford begins to plummet.

December 31, 1909 - Bedford's Post Office closes down. Only one store remains in the entire town. Population is now about 50.

1912 - Construction began on the two-story Bedford Elementary School, which was located on the site of a previous College, which burned down in 1893.

1940s - Population at a meager 76 gets the first big boom thanks to World War II.

1949 - Bedford Boys Ranch, originally a home for boys, was established. (in present day it is a social center and recreational park, and also the site of the July 4th Fireworks every year.

1953 - The town of Bedford is incorporated, boasting a population of 475 within a two-square mile area, including residents of the Boys Ranch.

1955 - The city's first fire department is established with 30 volunteers.

1964 - First library built in a small home near the fire hall/city building.

1966 - Library moved to a larger house on Forest Ridge Drive.

1975 - City acquires the Bedford Boys Ranch and turns it into a park. New City Hall/Police building built on Forest Ridge. Library was moved to the bottom floor.

1980 - Population is 20,821 Annual growth rate was 7.71% and taxable property value was at $251 million. Additions to the city included a new library, service center, animal control center, senior citizens center, community center and expanded park and recreational facilities. A downturn in the national economy impacted the community. 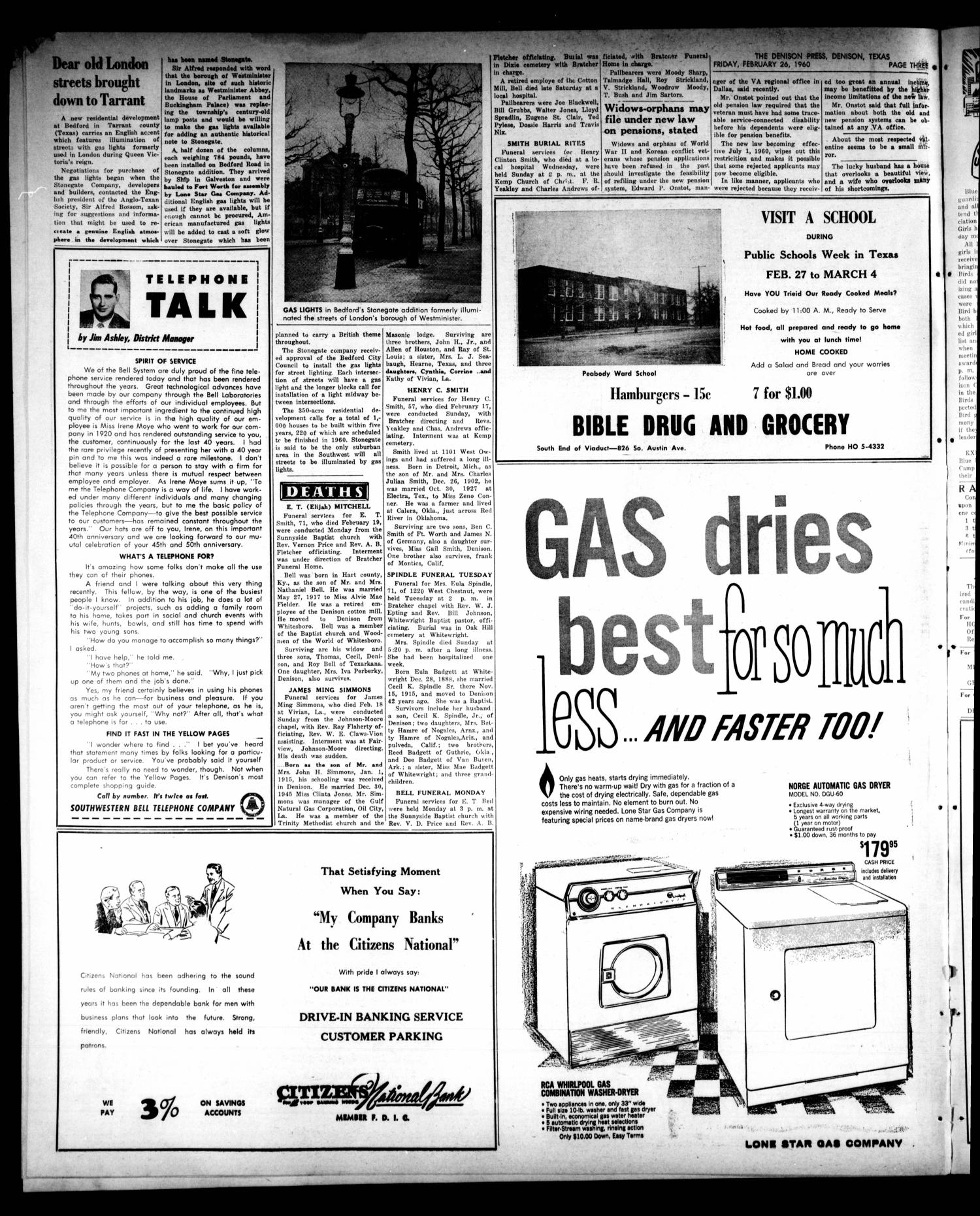 "A new residential development at Bedford in Tarrant County (Texas) carries an English accent which features illumination of streets with gas lights formerly used in London during Queen Victoria’s reign.

Negotiations for purchase of the gas lights began when the Stonegate Company, developers and builders, contacted the English president of the Anglo-Texan Society, Sir Alfred Bossom, asking for suggestions and information that might be used to recreate a genuine English atmosphere in the development which has been named Stonegate.

Sir Alfred responded with word that the borough of Westminister (sp) in London, site of such historic landmarks as Westminister (sp) Abbey, the House of Parliament and Buckingham Palace) was replacing the township’s century-old lamp posts and would be willing to make the gas lights available for adding an authentic historical note to Stonegate.

A half a dozen of the columns, each weighing 784 pounds, have been installed on Bedford Road in Stonegate addition. They arrived by ship in Galveston and were hauled to Fort Worth for assembly by Lone Star Gas Company. Additional English gas lights will be used if they are available, but if enough cannot be procured, American manufactured gas lights will be added to cast a soft glow over Stonegate which has been planned to carry a British theme throughout.

The Stonegate company received approval of the Bedford City Council to install the gas lights for street lighting. Each intersection of the streets will have a gas light and the longer blocks call for installation of the light midway between intersections.

The 350-acre residential development calls for a total of 1,000 houses to be built within five years, 220 of which are scheduled to be finished in 1960. Stonegate is said to be the only suburban area in the Southwest will all streets to be illuminated by gas lights."